Some patisserie for a friend & teddy bears having a picnic!

Phew! These little confections were definitely a challenge, but one I really enjoyed facing up to & I have to say that, even though I'm not a great fan of "fancy French" patisserie style, I actually quite like the way they turned out! I hope my mini friend likes them too! 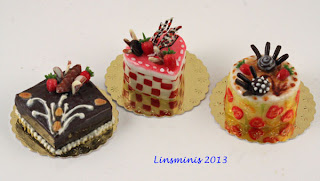 At the same time, I had a request to make a Teddy Bears' Picnic cake again & even though I'm never very keen on re-making a piece because, for some reason, they never work out the same twice (which is why I don't "get" copiers as I can't replicate my OWN work, so how the hell can someone copying do it.....), I wasn't prepared to let my mini friend down so said "Yes!" Actually, for once, I have to say that the 2nd cake is actually better than the 1st! 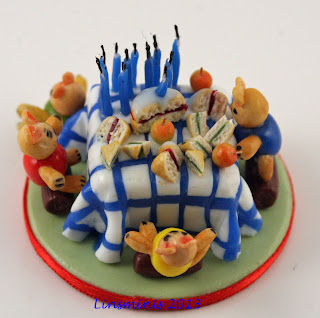 Then I got a catalogue in the post from Lakeland - a big kitchen/cooking store here in the UK & on the front cover was the most gorgeous Easter cake they had made to advertise a rather expensive air pump spray set for producing graduated colours on icing...well....the cake was so pretty that I just had to reproduce it in inedible miniature! Thank you Lakeland for the inspiration! 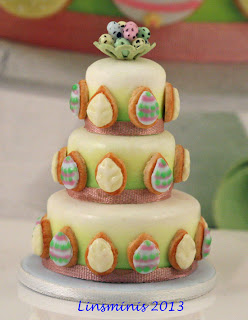 These are all SOOO wonderful! Love the teddies :)

I´ve discovered you few days ago and your work is amazing! Delicious and realistic!!!

I´ve created a blog I´ve linked you! If you like to take a look here is the link http://riversidemanorproject.blogspot.com.es