I've had the resin out again & this time there were no heart attacks or any other distractions to bother me...apart from the fact that I swear I'm beginning to go rusty!  It has not stopped raining for over 2 weeks now & when I say "raining", try thinking monsoon-like rain.....but without the heat! It actually stayed dry yesterday so I managed to get the grass cut in most places...there were other parts of the garden though that were no-go areas...unless I wanted myself & the grass cutter to sink, never to be seen again!
I began to get excited today.....grey skies, but no rain....how silly can I be.....guess what...yep.... it's absolutely chucking it down again

Anyway, even though it is a dessert that I wouldn't thank you for.....I can't stand anything "cakey" in desserts & the thought of soggy sponge fingers drenched in alcohol, lurking in underneath the lovely fruit filled jelly & whipped cream, is enough to make me run a mile!

I much prefer the miniature version of it......it's not edible & therefore safe! 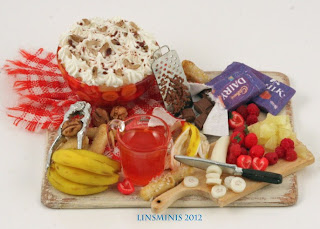 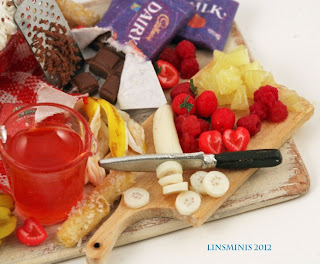 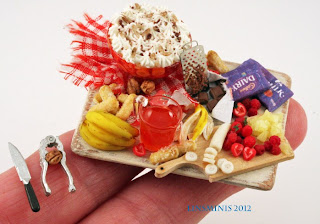 This time last week I was totally oblivious to the chaos that was going to engulf me the next day & was happily making loads of tiny clams.....a long, drawn out process where each shell is made separately, baked, a tiny clam added, baked again & then finally the 2 shells put together &baked once more.  On the Monday night, I heaved a sigh of relief...all was ready for mixing the resin the following morning & FINALLY putting the "Making Clam Chowder" together!
Tuesday morning dawned with still no inkling of things to come...the hubby seemed his usual self & went off to cut his elderly parents' grass (taking advantage of a very rare dry day!) & I happily mixed up the resin for the chowder.  BIG mistake!

I had just filled the pans & sour dough bread bowls & was just about to add the prepared clams when he came home.....now anyone who works with resin knows that there is a "perfect time" to add things to it to stop them sinking to the bottom & out of sight.....my resin was just at that stage when my hubby decided that he would suffer an MI (heart attack)...pretty inconsiderate timing I would say! :-)  You can imagine the organised chaos that followed....a call to the ambulance service...2 of which duly arrived, which was just as well as the ECG monitor in the 1st one kept saying "No Battery", 20 mins later we were off with blues & twos blaring to our nearest cardio hospital 45mins away.  I've always wanted to be an ambulance driver as in no way could I be described as a slow driver & am in love with the idea of peeps getting out of my way when I want to get somewhere! LOL......getting to ride in one was the next best thing I suppose!

4 hours later the hubby was out of emergency surgery having had a 12" clot removed from his coronary artery, a stent fitted & saying that he felt better than he had done for a long time! You'll be relieved to know that he came home 2 days later & almost a week later seems to be making a very good recovery! Just as well as you might have guessed that I'm not the best nurse to be had!

Meanwhile back in my workshop, my resin had set beyond the point of being able to add anything to it & I was about to despair....all that work wasted...see why I call the timing inconsiderate! LOL.....the good news, however, is that with a bit of effort, I managed to save all my work of the few days before & against all the odds, my clam chowder was completed....& I had enough clams left to put together a pan of simple steamed clams.  So all is well (at the minute).........both hubby & clam chowder are well! 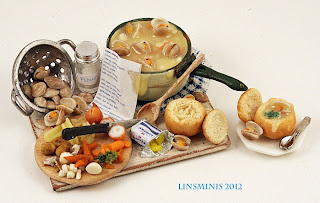 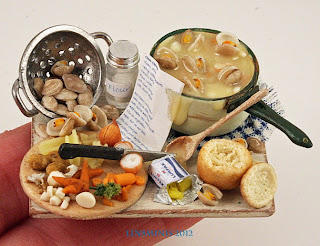 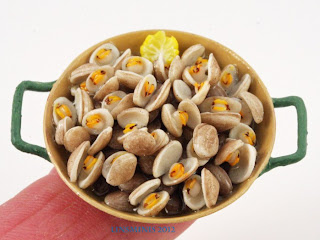