The rain has stopped...for now....& the forecasters say that summer might come over the next few days...I don't really believe them though!  We were promised a "BBQ Summer" again this year & I'm sure if I was to BBQ under an umbrella with thermal underwear on, they might have been right! LOL
I've been working on a lemon meringue pie set over the last couple of days...crazy really, it takes soooooo much longer to make the mini version than it does the "real" version... that was made & eaten 2 days ago & this was just finished this afternoon!
Typically Auctiva's site is down for update, just when I wanted to write the listing to go onto eBay tonight...so I thought I'd make this post while I was waiting! 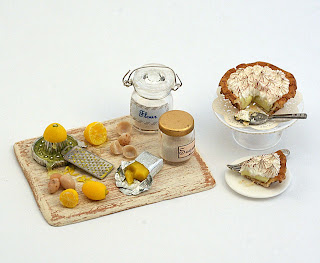 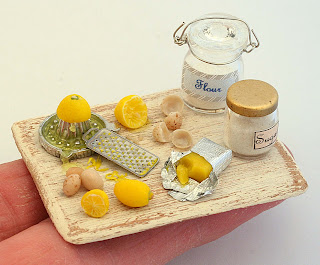 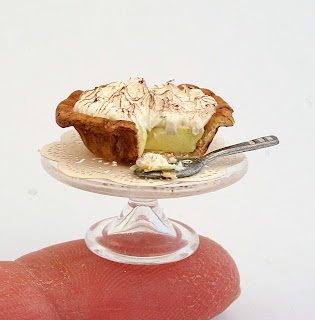 Hello dear Linda:)
This piece and prep board is fantastic:) I love lemon pie!! Hope the sun will shine on you tomorrow. Hugs:)

The Lemom pie is incredible!!
The prep board is sooo real. Love the lemons and the lemon juice :)

Your lemon meringue pie looks so much better than mine! It sucks that auctiva is down but you don't need auctiva to show off your work on ebay! :D

Congratulations Linda!!
The limon pie are perfect,it's so real

Hi Linda,
We have similar weather conditions, thankfully we have our miniatures to enjoy when the weather is not so enjoyable. I love the lemon pie, fantastic work!

I adore the lemon pie in real life, and your prep' board is so perfect that I definitely want eat one of these pies now!!!!
Hugs,
Paloma

Oh wow,it is perfect and the pie looks so yummi .Hugs,Jeannette

Beautiful and refreshingly delicious! I need to make one of these in full size for my family--it would surprise them as I don't bake! I love it.

The prep table is perfect! And the lemon pie with merengue looks delicious... :b

Love the prep table, it has everything there should be! Lemon meringue pie is my favorite dessert... and yours looks even tastier then the real ones I use to buy at cafés!
~Hanna

oh yum! that is beautiful~